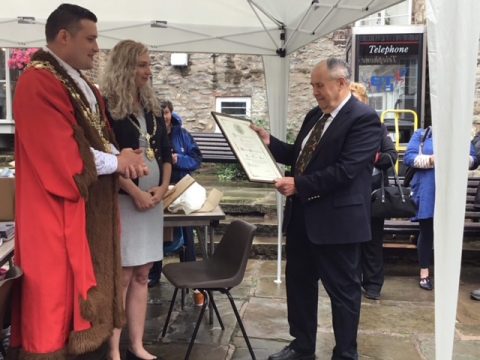 Milner Whiteman has been appointed an Honorary Freeman of Much Wenlock in recognition of his outstanding service to the town and community of Much Wenlock.

Milner served as a local Councillor for over 50 years, standing down from the Town Council in May of this year.  He first become a Councillor for the old Borough of Wenlock in 1965 and represented Much Wenlock on various councils continuously from 1970 to 2021.  He was Mayor of Much Wenlock four times, in 1974, 1981, 1996 and 2013.  In 2001 Milner was awarded an OBE for Services to Local Government.

The community owes Milner a huge debt of gratitude and the honour was richly deserved.

Milner was presented with a framed Freedom of the Town scroll by the Mayor, Councillor Daniel Thomas, on 3rd July at the launch of the book “Wenlock’s Covid Chronicles”.  Milner was also a contributor to the book.

Milner is pictured with the Mayor and Mayoress and members of his family.